"Ronald loves McDonald's and McDonald's food. And so do children, because they love Ronald. Remember, children exert a phenomenal influence when it comes to restaurant selection. This means that you should do everything you can to appeal to children's love for Ronald and McDonald's." 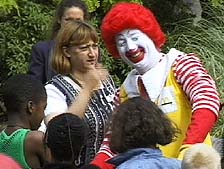 The Tower Gardens Play Scheme, in Tottenham, London is a community-run group for local children. Every year it holds a 'FunDay' to celebrate the hard work and progress of the staff, children and parents. One of the regular attendees is a seven-year-old boy called Charlie, son of a certain Dave Morris - better known to McSpotlight devotees and McDonald's employees as one half of the 'McLibel 2'.

Preparations for the FunDay had been going well, and posters and leaflets had been printed and distributed. But, just one week before the event, new posters suddenly went up - this time covered in McDonald's logos and announcing a forthcoming 'Ronald McDonald' day, with no reference to the Playscheme at all. This was an extremely threatening and sinister turn of events, especially to those familiar with McDonald's attitude towards advertising to children: "Children are virgin ground as far as marketing is concerned" admitted their Global Marketing Chief David Green in the McLibel witness box.

PHOTO: Ronald meets'n'greets his targets. Two of his minders look out for trouble.

Parents complained at this apparent takeover of their children's event, but were told by Playcentre staff that it was "out of their hands". McDonald's had offered to 'donate' Ł500 from their Head Office to the Play Centre, and then Officials of Haringey Council had stepped in to ensure McDonald's got various 'pre-conditions' they wanted (see below). This caused a huge row in the Playcentre and some local parents prepared to protest on the day itself. A special version of the 'What's Wrong With McDonald's' leaflet for kids was printed, and hundreds of free badges made to give away.

As the witching hour approached, a white cadillac sped through the gates of the park and came to a stop outside the centre... red wig himself had arrived. And he brought twelve McDonald's staff with him "to ensure the kids have a good time". These included officials and heavies from Head Office, a chauffeur, several power-dressed women and some minions whose only role seemed to be to smile inanely and block attempts by protesters to meet their hero. Some parents - as well as your erstwhile McSpotlight photographer - were followed around by McDonald's people & police and at one point were even told to leave their own local park. They refused, and their Anti-McDonald's leaflets and badges went down a storm with children, parents and Playcentre workers alike.

PHOTO (left): Why do these balloons have big 'M's on them, mum?

PHOTO (right): A McDonald's heavy wonders what he's doing at a kids' fete.

Meanwhile Ronald was doing what he does best - selling the McDonald's Experience to children. He gave out balloons, badges, drinks, flags and games plastered in logos. He got the kids to chant his name. He introduced McDonald's products into his magic show. He called the kids his 'little French fries'. And he finished up by giving each child a voucher for some 'free' McD's food.

Many of the parents were enraged at what they saw as the "corporate brainwashing of our children". As McDonald's promotional tool came back to present the Playscheme with a huge cardboard Ł500 cheque, and the kids were corralled to spell and chant his name, tempers were lost and the local Mayor's sycophantic tribute to McDonald's was drowned by a wave of heckling and jeering. The crunch came when the Playscheme worker who'd organised the event resigned from his job.

Enraged parents are planning to continue their efforts to ensure that local Playschemes are kept free from corporate manipulation- they have written to the local council demanding an explanation of how their children's fete was allowed to be turned into a sinister corporate promotional exercise. McLibel defendant Dave Morris said afterwards, "just because they offer bribes to hard up, underfunded community groups - not to mention schools, hospitals, sporting events and all the rest - companies mustn't think they will be allowed to get away with using and exploiting people for their own advancement. Our protests today gave the children and parents a chance to see through McDonald's sinister manipulation and propaganda. Those who target and abuse children must be exposed and countered at every available opportunity." 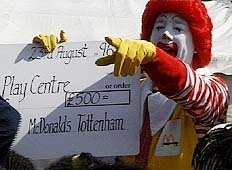 "Giving something back to the community"

The hijacking of the Tower Gardens Annual FunDay is just one example of McDonald's so-called 'Charitable activity'. Even McDonald's top executives have admitted that helping local communities is nothing more than another advertising ploy (their Global Marketing Chief, David Green, admitted in the McLibel witness box that community and charitable activity was "a benefit to the company" and "good business" which gained "free publicity". He also explained that 'educational' promotions in schools "generate better feelings" towards McDonald's and lead to more 'patronage').

For more information about how McDonald's manipulate local communities for their own ends, see the McDonald's 'Charitable' Activity page. 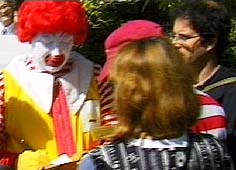 The high-profile nature of this event was due entirely to McDonald's stupidity (or was it deliberate?) in picking on a McLibel defendant's local group. John Vidal from The Guardian   followed the day's events, and the story made the front page (!) of Saturday's edition.

PHOTO: McLibel defendant crowded out by McDonald's staff as he offers Ronald a leaflet.

However, there is no doubt that this sinister tactic is being used by McDonald's and other corporations all over the world. There is clearly an urgent need for people everywhere to be alerted to the truth about McDonald's and their insiduous promotional strategies.

The McLibel Support Campaign are now calling for a national Kids Against McDonald's Network (more details on McSpotlight soon). A new What's Wrong With Ronald McDonald special leaflet for kids is now available from the campaign.

People all over the world are campaigning against McDonald's on this, and many other issues. For full details from over 20 countries, please see the Campaigns pages.