As seems traditional at the end of each year, we have
looked back at the main events of the year 1996,
forming a focus on McDonald's, McLibel and McSpotlight.

Way back in February, McSpotlight (consisting of 1,300 files) was launched in London, Chicago, Helsinki and Auckland. McSpotlight quickly became (arguably) the most talked about web site on the entire Internet, gaining international media attention throughout the year. In just over one month it was accessed one million times and by the end of the year the figure was six million (and increased in size to almost 3,000 files). It wasn't only those with Internet access that got to see McSpotlight - volunteers had demonstrated the site and shown the McSpotlight video at seminars, conferences, fayres and exhibitions. In May McSpotlight made its parliamentary debut and in July McSpotlight was loud and proud at the M41 street party. October witnessed McSpotlight taking a proactive approach in terms of media coverage, by obtaining an exclusive interview with Ronald McDonald, and during November McSpotlight provided daily coverage of the McLibel closing speeches.

Consumers of animal flesh had a bad year. Mad Cow Disease dominated the news for most of the year. Rather amusingly, early in the year McDonald's UK had launched the 'Vegetable Deluxe' and in March they dropped beef from their menu entirely for a few days! This occured when a letter to the press from the defendants reminded the media of promise made by the president of McDonald's UK during the McLibel trial, that McDonald's would stop selling beef if it was shown to be hazard to public health. Within 24 hours McDonald's had issued their own statement saying McDonald's outlets in the UK would stop selling British beef. The entire European Union and the rest of the world stopped buying British beef and in October new evidence was found linking BSE with the human brain disease CJD. By the end of the year both McDonald's and the EU were still boycotting British beef.

As if mad cows weren't enough to worry about, next on the menu were killer burger bugs. In September the parents of a child, who died from E.Coli 0157 food poisoning after eating McDonald's burgers in Spain and England, began legal proceedings for compensation in the USA. And in December, three children who suffered E.Coli 0157 food poisoning in England also from McDonald's burgers were granted legal aid to sue McDonald's and their supplier McKey's. E.Coli remained in the media as 16 people died in an outbreak caused by contaminated meat in Scotland.

In May McDonald's and Disney announced a deal giving McDonald's exclusive rights to use characters from Disney films in its promotions around the world for 10 years. Commentators called it the biggest global marketing alliance yet devised.
McDonald's exclusive deal didn't help when they offered Disney 5 million pounds to do a joint promotion of the film "The Absent-Minded Professor". Comic actor Robin Williams vetoed the plans, turning down the million pounds McDonald's had offered him as a sweetener.
Award for the most short-sighted promotional link was McDonald's use of the film 'Babe'. Oblivious to the film's strong vegetarian message, McDonald's used the film as a promotional gimmick in the USA, only to find that they had given animal rights and vegetarian groups an easy target for successful campaigning.

In September, McDonald's were embarrassed when they were accused of stealing ideas from Viz magazine in McDonald's 'top-tips' adverts. Viz latter accepted an undisclosed sum in an out-of-court settlement but as part of the deal they signed a confidentiality clause.
The media slammed McDonald's hypocrisy when later in September, they threatened the owner of a UK sandwich bar named 'McMunchies' with legal action for breach of trademark. A retired Scottish school-teacher called Ronald McDonald , and the chief of the McDonald clan in Scotland were both outraged at this further attempt by McDonald's to claim global dominion over the prefix "Mc" and the name "McDonald" which has been an Irish and Scottish family name for centuries.
In December, McDonald's suffered a further set back when the Supreme Court of Denmark ruled against McDonald's claim that a sausage stand called "McAllan's" was in breach of its trademark.

McDonald's had a hectic year in South Africa which culminated in September when they won a trademark battle appeal, prohibiting competitors from using the McDonald's name and the golden arches symbol. But McDonald's suffered from wildcat strikes and discontent from workers and franchise owners over poor conditions.
McDonald's didn't have it all their own way. They sued a Jamaican fast-food company (called the McDonald's Corporation Limited) which had been operating in Jamaica since the early 1970's for breach of trademark. The Jamaican company (using evidence from the McLibel Trial that they had obtained from the Internet), got an order barring McDonald's from opening stores in Jamaica with the name 'McDonald's' until the trademark courtcase is completed. Finally, in December, a higher court overturned the decision, allowing McDonald's the right to use the name McDonald's in Jamaica. However, the trademark case against the Jamaican company continues.

McDonald's progressed further towards their goal of global domination. By the end of the year they had almost 20,000 outlets and a presence in 101 countries. They even opened the world's first fast- food ski-through in the Swedish resort of Lindvallen. They opened stores in India, selling lamb instead of beef.

In July, McDonald's Drive-Thru plans for the local Conservative Association HQ in Winchmore Hill in North London were revealed. They were met with allegations of bribery and widespread opposition by local residents. The political row that followed proved too hot for both the Conservative Party (including the local MP, Michael Portillo) and McDonald's and ensured that McDonald's chose not to appeal when the required planning permission was refused.
There were many other hotly contested new development plans revealed during the year. People were outraged at suggestions that McDonald's might be allowed to open a junk-food outlet at Stonehenge.

It had been predicated that 1996 would be a good year for McDonald's, but in the USA things didn't go according to plan. McDonald's began spending $200 million on a promotional blitz in the USA & Canada in a doomed attempt to lure adults to visit their outlets. This included the launch of the new adult burger, the "Arch Deluxe" in May. Despite this blitz, the new range proved unpopular and US sales continued to fall.

The annual international Day of Action Against McDonald's on October 16th was celebrated with passion around the world, but protests against McDonald's were certainly not confinded to that one day. Environmentalists, animal rights activists, workers, nutititionists, NIMBYs, and others had a busy year resisting McDonald's exploitation and plans for global conquest. 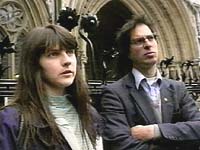 McLibel - End of an era

The McLibel trial celebrated its second aniversary in June, and became the longest trial of any kind in English legal history in November. The evidence was completed in July, and the closing speeches in December, but the Judge reserved his Judgment until well into the following year.
During 1996, it was revealed how McDonald's had used police sources and spies to investigate anti- McDonald's campaigners, and McDonald's were completely nailed once and for all on their responsibility for rainforest destruction.